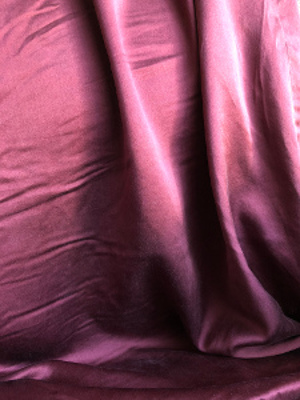 Hot on the heels of last week’s expensive pillow post, I thought I’d talk about a not nearly as expensive mulberry silk pillowcase that I purchased at the start of last summer, pictured above. I bought it because I had heard that silk will stay cool all night relative to the ambient temperature, and that it doesn’t suck the moisture out of your skin and hair unlike cotton pillowcases. Thankfully both of these things turned out to be true and I slept pretty well throughout the summer. While I was searching for the right case to buy, I came across all different types of silk materials, but ultimately ended up choosing mulberry when I learned that it was the highest quality silk out there.

I briefly went on a reading binge and I’d like to share with you all what I learned about the history of silk, how silk is produced, and why mulberry silk is the best of all silks. As far as the pillow goes, I’m definitely happy with my purchase. I chose the reddish/burgandy like color pictured above, and with its look and feel I like to imagine that I’m ancient royalty everytime I rest my head on it. Given the great experience I’ve had this past summer, come next season I might take the plunge and go the full silk bedding route.

Silk is a type of natural fiber known for its smooth texture and hypoallergenic properties. It’s produced from the cocoons formed by silkworms, but not just any. While there are many types of wild silkworms, one in particular has been bred and domesticated for the purpose of silk production throughout the years. This species is known as the Bombyx Mori, and has been pampered and domesticated so much that it would not be able to survive on its own if released in the wild, and cannot even fly as it once could.

If you didn’t already know that silk came from silkworms, don’t let the fact that it comes from their cocoons disgust you. There are a lot of processing steps between the cocoon and the final silk product that you wear or sleep on. It’s a bit sad, but the silkworm is killed by steaming the cocoon and placing it in hot water, which unravels the silk strands and melts off the glue secreted by the silkworm that binds the cocoon together. This process results in easily spooled silk filaments.

Who discovered silk, and when?

The truth is that the exact origins of the production of silk are unknown. We know that silk was first produced in China, but when exactly this began is a mystery. When history is poorly documented or unknown, cultures always come up with their own origin stories to fill in the blanks, which I always find interesting. In this case, as Chinese folklore goes silk was discovered by Xi Lingshi, wife of the legendary Yellow Emperor. The story goes that a silkworm cocoon fell into her tea, at which point she noticed that the strands on the cocoon could be unraveled for a great distance and reeled into a thread.

Although the timing of this folkloric story would have been about 2,640 B.C., it’s been unearthed fairly recently that silk may have been in production in China since at least 8,500 B.C., as an archaeologist just discovered silk proteins in an ancient tomb. Based on that evidence it seems that the legendary origin story is 6,000 years too late to be historically accurate, although nonetheless interesting!

What is mulberry silk, and how is it different from other types of silk?

Mulberry silk comes from silkworms who have been exclusively fed the leaves of a mulberry tree. Silkworms love mulberry leaves because they find them easy to chew and consume. Silk produced by worms who have been raised eating mulberry is the smoothest and whitest that is known of, and is therefore more expensive than other types of silk.

For comparison, silk produced from wild silkworms who feast on whatever plants are available to them produce a silk called tussar. Tussar is often more brittle and rougher in texture as compared to the smoothness of mulberry silk.

I realize that I’ve had back to back posts on pillows. Don’t worry, I don’t intend to turn this blog into PillowWorld, your one stop shop for pillow facts. If you like history, you’ll probably also enjoy the in depth piece I did on the history of U.S. quarter prices and metal composition. Stick around for next week’s post which will be a little more diversified in topic and interesting with respect to statistics provided. Have a great week!