If by now you’re not familiar with Uber it’s a ridesharing service in the form of a convenient mobile app. In 2017 I quit taking the bus. Let me paint you a picture of what used to be my commute, which wasn’t even too bad to begin with. I live in the San Francisco bay area, about 40 miles south east of SF proper. If you’re not from the bay area, I should tell you that most of it is large swaths of suburbs as is common in California. Don’t get me wrong, there are downtown and metro like areas in the likes of Oakland, Berkeley, Alameda, Palo Alto, and San Jose- but the bay area is no New York City or similarly booming metropolis.

When you live in the suburbs, which I do- it’s pretty much expected that you have a car. The bus lines sparsely come because no one really takes them. The one that I dependend on ran once every 45 minutes to an hour. I had sold my car when I moved to San Francisco for college because thankfully, SF is one of the few places in the bay area where you really don’t need a car (and probably don’t want to drive it if you have one). When I moved back home, I thought I might be able to go without a car for a while.

Taking the bus was costing me ~2 bucks a trip, or $4 daily. I was using it to get to BART, the bay area’s subway train system, which is 3.5 miles from where I live. The problem was that assuming I was on time and caught the bus, those 3.5 miles took 25 minutes, sometimes longer. Then I’d hop on the train for 50 minutes. The bus ride to the train was taking half of the time I spent on the train itself, which was already a bit long.

Uber to the rescue?

You might’ve been able to gather from the language I used above that I wasn’t very good at catching the bus on time. Whenever I missed it I’d call an Uber, since I couldn’t afford to wait another hour for the next bus and be late to work. That’s how it started, at least. The next thing I knew I was sleeping in for an extra 30 minutes, knowing that I could call an Uber to get me to BART and still be on time. I went through multiple phases of using Uber for my commute. My thought process went something like this:

$$$ Assessing the costs of Uber

On average, Uber X was costing me $9.50 per trip, or $19 a day. Since I work 5 days a week, each month I was spending $380. Uber Pool was a few dollars cheaper per trip, so while I was doing that (which didn’t last long) I was spending a little less, at $260 a month. I remember being conscious of the costs early on and thinking, that’s not too bad. How could I think that? I justified it because I didn’t own a car and figured I was saving money. I told myself that the cost of Uber was predictable and reliable, whereas owning a car came with the responsibility of sudden maintenance requirements, insurance, and fuel costs. Besides, I’d only be going 7 miles a day to catch the train (you don’t want to drive to SF in rush hour traffic). When I thought of it like that, it seemed like a car was overkill.

This was an especially tough decision for me to make because I’m actually really into cars, and wanted to justify owning one. The problem is that I had just assumed that the cost of car ownership would be more expensive, and didn’t actually take the time to breakdown the costs- mostly because I was afraid of finding out that I might be wrong about the cost effectiveness of Uber and that I had been wasting my money the whole time. Well, I finally sat down to crunch the numbers, which is why I’m writing this post. I looked at the annualized cost (time & money!) of Uber, owning a car, taking the bus, riding a bike, and of course walking.

Is car ownership worth it?

To give a car the best chance of coming out on top, I only considered cheap econoboxes- of which the Honda Fit is my favorite. I’m not particular to owning a brand new one, so I only looked at ones at least 4 years old. My normal, more car enthusiast self would have considered picking up a more interesting beater off of Craigslist, but the rational and adult side of me who is seeking reliability is writing this post at the moment. Looking at local listings, I’m seeing $10,000 for a 2013 with 27,000 miles. Sounds good to me, so I’ll use that as the hypothetical car for my calculations.

The fuel economy of these things is great, 28mpg city, which is where the majority of my driving would be. Gas prices in the bay area generally hover between $2.80 and $3.50 so I’ll take the average of that and assume a $3.15/gal gas price. The Fit has about a 10 gallon gas tank, so that means I should be able to go 280 miles per tank, which would cost me $31.50 per tank. Since I only travel about 7 miles a day, one tank of gas should last me (280 miles / 7 miles/day) = 40 days. That’s pretty great, I’d have to fill up less than once a month. If I only used this car to get to the train station, I’d be filling up 6 times a year!

The cost of maintenance, including general engine repairs and tire & oil replacements according to AAA is $0.0628/mile. Given that I won’t be driving frequently, that seems pretty low. If I commuted for 240 days a year going 7 miles each day, that would be 1,680 miles driven a year. That only puts me at about $105.50 in annual maintenance costs.

I wouldn’t expect insurance for this car to cost me too much. Albeit, I’m 24 years old and I’m male- so I can probably expect a higher rate than other demographics. Since the car is slow and I have a clean driving record, I’ll go with a conservative $80/month for liability insurance, which is all I’d buy for a $10k car.

Summing up all of the costs, owning a car for a year probably looks like this for me:

At least if I only consider the first year’s costs, owning a car is obviously more expensive than Uber. The other thing I’m purposefully not accounting for is that I would likely use this car on the weekends, further increasing my gas and maintenance costs, but perhaps lowering my insurance cost on a per mile basis. Based on these calculations though, it seems like it would take almost 3 years for the cost of car ownership to pay for itself over not riding Uber. Again, while there’s always the odd $3,000-$6,000 beater that I could (and likely would) purchase in practice, I wanted to optimize for reliability here by getting a relatively newer car.

Finally, in terms of cars my other option is leasing. Looking online I see that I can lease a Honda Fit for $169/month if I sign a 3 year contract and pay $2,299 at signing. My costs with that option would look like so:

Hey, that’s not too bad! Leasing would be a little more expensive the first year because of the money due at signing, but after that I’d only pay $3,282.50 a year- which is over $1k cheaper than Uber.

Now that I know how much a car would run me on a yearly basis, let’s look at the rest of my options.

Let’s be honest, I threw walking onto that table just for kicks, but I’m not going to walk 7 miles a day. Can I do it? Thankfully, yes. But in terms of time taken I just don’t think it’s very practical. Anyway this table is unfairly biased against cars, since they require a hefty initial investment. Let’s use a line graph to stretch the timeline to 3 years. I’ll consider the gas, maintenance, and insurance costs fixed across each year, but I’ll divide the initial purchase price and sales tax by the amount of years the car has been owned for. For example, the 3 year cost of car ownership will be calculated by Gas + Maintenance + Insurance + (Purchase Price + Tax) / 3. Ok, here’s what I got: 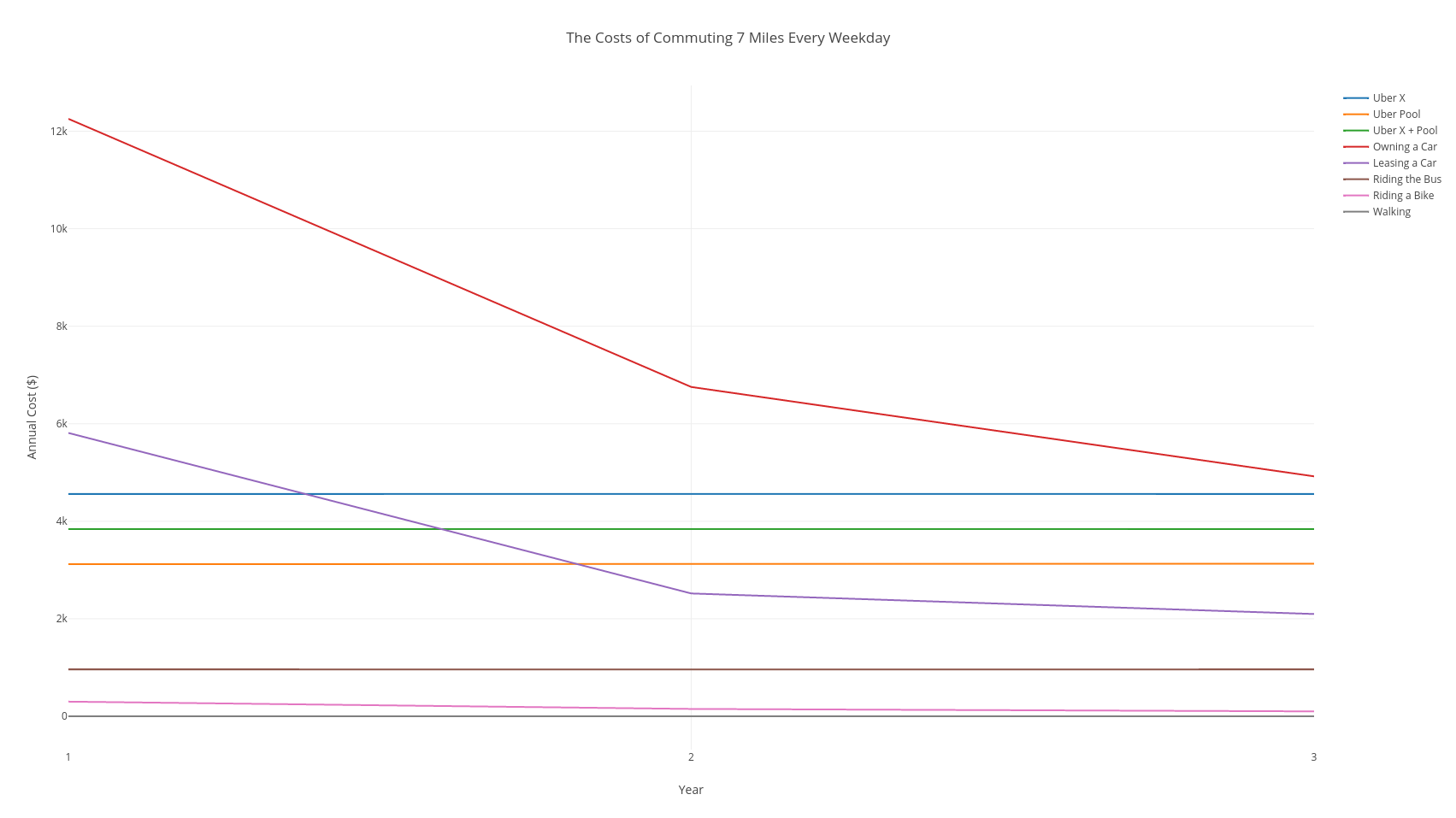 Are time and money the only factors?

If I was optimizing for speed and cost, I’d clearly go with leasing a car. By the middle of the 2nd year, leasing becomes cheaper than all 3 types of Uber rides- and is obviously much cheaper than owning a car outright over a 3 year period. The thing is, I don’t just care about time and money. My life has been getting increasingly sedentary, so I’m also optimizing for calories burned. When that’s considered, riding my bike is the clear winner. It’s the cheapest and healthiest option that’s also reasonable with respect to travel time. It also helps that I live in California, where I can ride my bike year round.

Wow, there’s just something about stretching out costs to a longer timeline that really puts things into perspective. When I see these numbers I’m not really proud of how much I spent on Uber over the past year. I don’t regret it and I certainly got my money’s worth, but I just feel like I could have spent all of that on something else if I was just a little less lazy and more prudent. Things I could have spent that money on:

I traded my money for convenience, and while I certainly feel that it was a fair trade, when I think of the health benefits I’m missing out on and the opportunity cost of the money I spent, it’s clear to me that I should have bought a bicycle. Does anyone have any suggesions for a road bike in the $200-$350 range and a good bike shop in the bay area?

If no one has any suggestions, I found a relatively cheap 21 speed aluminum Vilano commuter bike on Amazon that I really like and intend to buy in a few days. Hopefully it’s cheap enough that people won’t want to steal it at BART. Or maybe I’m just being naive?

As always, thanks for reading! In this post I primarily broke down my own personal finances. If you enjoyed that, you’ll probably also like my post from a couple weeks ago where I tried to guess the cost of making a Bellroy leather wallet.

See you next week!